I invited Johnny, whom I haven't seen nor heard from in years (he and his brothers became estranged from me in a classic case of Parental Alienation Syndrome foisted upon them as children by, in my opinion, their mother, Sharon R. Lightbourne), to have dinner with me at a nearby restaurant on his birthday but he never showed. He's an adult now and lives with his choices, and personally I think it unseemly that he asked me to arrange for full

payment of his college tuition and fees and unprincipled that he accepted every cent of the payments I provided for when he regards me as so odious.

I haven't seen nor heard from Jimmy in half a decade now, nor from Danny in almost four years, and nobody in my entire family has heard from any of them in eight or nine years. But parental love is so strong that it transcends individual grief and always seeks to succor familial victims of abuse (in my opinion PAS is child abuse). (Right: Jimmy, striker and sometime goalie for the McLean Sting, circa 1999.)

on your birthday at 8 pm at the Lost Dog Cafe in Westover. We'll start out a day at a time as father and son(s) in living out the rest of our lives from there. (Left: Danny watches as Johnny reaches into a lobster tank at a restaurant in Maine, circa 1999.)
Posted by peter at 07:12 No comments:

The last week of December I didn't run at all; although I felt guilty about it each day I took a week off to rest and heal. When I returned to running this past week, I felt sluggish and fatigued during each run, and my first run noontime run running with coworkers in several weeks produced a shortened jaunt of four and a half miles at a 9:30 pace which my running buddies afterwards described offhandedly as feeling slow.

On Thursday noon I tried to kick it up some and we went our customary five and a half miles on the Mall at a 9:09 pace but whenever my friends from work tried to chat me up as we ran about work and life as usual I answered in guttural monosyllables and hung doggedly on the last three miles, resisting the urge to stop and walk. I didn't get enough running in, either in terms of distance or pace, those weeks I spent in Dallas and it shows.

Yesterday I started a new program as a drop-in coach in the same Walk-To-Run (WTR) training session in Arlington that I used last January to kick start me back to running after my year and a half layoff due to injury. At the introductory meeting I was introduced by the program as the "rabbit" coach (as opposed to the rest of the "penguin" coaches) to the assembled newbie walkers/runners in case any of them stick with the program and prove to be "fast."

We walked a mile after the christening lecture about layering, hydration etc. in 14:30 for our first workout which drew astonished remarks from the trainees about our fast pace but which I'm pretty sure was the product of a short mile. The goal of the program is to have the attendees run/walk a 5K in about four months time and since I have been designated to be the "fast" coach of the program I went home afterwards and cranked out a 5K route in 28:49 (9:17) around my neighborhood to see what I could do the distance in these days, although I felt extremely sluggish and winded as I did so. Obviously I have a long way to go to get back into some semblence of condition and I might even have to do some track work.
Posted by peter at 00:01 2 comments:

Life As A Pizza

felong desire to visit the remote battlefield of the Little Big Horn, known when I was a child as Custer's Last Stand, where about 212 troopers perished to the last man on June 25, 1876 in Montana when five 7th Cavalry troops under General Custer attacked a huge Indian encampment of up to 10,000 Sioux and Cheyenne, of whom perhaps 3,000 were warriors who came swarming out of their village like angry bees when provoked and annihilated the soldiers in about 90 minutes. A few miles away Major Reno with the other seven troops of the regiment barely held on in a hedgehog defense atop a hill for two days before he was rescued by General Terry arriving with reinforcements.

(Left: Pizza for two last winter at the Lost Dog Cafe in Westover on my youngest son's birthday. No, he didn't show up.)

It was the stuff of American lore, Remember the Maine, Send More Japs, I have not yet begun to fight, Nuts!, The Shot Heard Round the World, the Alamo. The reality, a hillside leading down to a meandering stream. impinged upon the heroic nature of the historic record, especially since it took me thirty-eight hours to drive there and back, alone, from my sister's house in St. Paul, but the memory in my mind's eye of the swirling fight, imprinted there by books, pictures and reflection, lives on. (Right: Homemade broccoli and tomato pizza last summer.)

That was my big trip last year, I thought, spending three hours wandering from the Custer site to the Reno site and back again in what is basically wasteland ranch land. Now at almost sixty, having seen almost every important thing I have wanted to see in America, I am free to cut the bonds of North America and go abroad.

But on my FB page lately I have been posting a photo each day of various izza pies I have had in the last year. The most spectacular picture shows an eighteen-inch supreme pizza pie I ordered for dinner, alone, the first night of trial in Dallas last month. (Left: An "everything" pizza in Dallas last month.)

My stay in Dallas to attend a seven-day trial was a typically intense litigation experience. Looking at the snapshot made me realize that that was my big trip last year, a work-detail of three months duration, off and on. 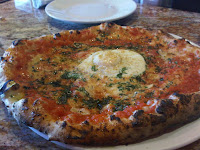 fined my year that just passed, sort of life by pizza analogy. So I decided to post the photographs here also, for what they're worth. (Right: Neapolitan pizza at Orso's right here in Falls Church. Yes, that's an egg on top.)
Posted by peter at 04:45 No comments:

As you can see, history predominates, and I was on a Custer kick last year, going out to Montana in July to see the site of Custer's last stand. Since I had to drive 900 miles each way from my sister's house in St. Paul for a three-hour ramble around the remote battlefield, I boned up on Custerology before I went. (Right: Custer and his men perished on this incline in 1876 trying to reach the river in the background fringed by a line of green vegetation.)

I had always wanted to see that non-descript hillside leading down to the non-descript river where in 1876 desperate men fought for their lives, with the total annihilation of the 212 troopers under Custer's command being achieved in a mere ninety minutes at the onset of the battle. I think those troopers, relying on their superior firepower, roamed the slope above the great Indian encampment at will and kept the greatly more numerous Indian warriors at bay for the first sixty minutes; then the constant subversive incursions by warriors upon their skirmish lines caused the cavalrymen's tactical stability to start to erode, and suddenly some troopers started to flee and disintegration occurred and it was all over in a final, furious half hour of fight and flight. Four miles away on an isolated hilltop overlooking the river, most of the men under the combined command of Reno and Benteen survived a two-day besiegement. The archaeological book by Fox heading the list told a fascinating forensic tale about Custer's last battle.

Two of the books on the list were books that I reread. I read the Sandoz book about the Little Bighorn battle again after 35 years; indeed, this little gem of a history book, which exonerates Reno for responsibility for Custer's demise, is what fired up my desire in the first place to go visit this remote battlefield someday. The other reread on the list contains my favorite short story of all time, a haunting, bittersweet love story by J.D. Salinger called The Laughing Man. The summer I was a camp counselor in New Jersey at age 16 for economically deprived youths from the inner New York City, I read that story at nighttime to my tough 12 year-old charges and it held them mesmerized.

I don't read much fiction but I always enjoy Robert Louis Stevenson and Kidnapped was no exception, no matter how implausible its plot was. I like his highly complex sentence structures and gorgeous descriptions. I almost drowned in a rapids in 2010 and Stevenson's description of his hero's near drowning in a surf transported me back for a few mesmerizing moments to my own struggles underwater.

Besides the two Custer books already mentioned, four other books dealt with the Custer battle, one being a personal account of the combat by Windolph that included other interesting accounts about participants culled from contemporary letters, news stories and court martial testimony. The other three books just added to the mystery of the battle of annihilation and instilled in me an appreciation for the inevitability of that day's occurrence; once disaster starts to happen it is very difficult to counter, although this can lead to the emergence of heroes.

Wambaugh's book was a gripping tale about a serial arsonist, and Ambrose's book about the Screaming Eagles fighting from Normandy to Berchtesgaden is a legendary Greatest Generation account. I thought the account of Hannibal, one of history's great captains, moving his army from Spain to Italy through the Alps (with his elephants) was an interesting exposition on the value of surprise in war and the benefits that can go to someone who thinks outside the box.

Vonnegut's book Canary in a Cat House was a hardback I bought recently on Amazon; I had tried to find it all through the seventies when I was attempting to read every single book that Vonnegut ever wrote. It was always listed in his books as a prior publication but was always unavailable. It turns out that this title contains all the same stories as those in another short story anthology of his, Welcome to the Monkey House, with one story added that was in yet another anthology of his anyway; but finding it at last gave me an opportunity to reread several of Vonnegut's older short stories, much to my enjoyment.

So what books did you read over the summer?
Posted by peter at 09:53 2 comments:

I hope to see you there then.

Happy New Year! Johnny, it's been years since I've heard from you, please join me for dinner on your birthday later this week at the Lost Dog Cafe in Westover at 8 pm and we'll 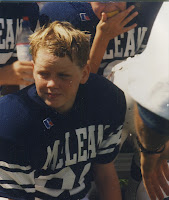 start the lifelong task of catching up again as father and son. I'll be there then, I hope to see you!
Posted by peter at 02:15 No comments: