I Got Intel Today

None of my three sons of has spoken to me in over seven years or to any Lamberton in over ten years, classic Parental Alienation Syndrome (PAS).  She won't even tell me if they're well or even alive (can you see why I don't regret being divorced from her?). 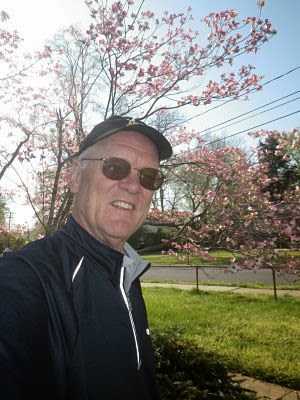 Today I ran past our old house a few miles away and spoke with a former neighbor I spotted who told me she had heard that my oldest, now in his late 20s, has or had made a lot of money in on-line gambling.  Since he never went to college (I own a prepaid tuition plan with him as beneficiary which pays 100% of his tuition & fees, which the IRS has threatened to vacate this year for non-use due to its tax preferential treatment) I guess, if true, it's good he's "gainfully employed." 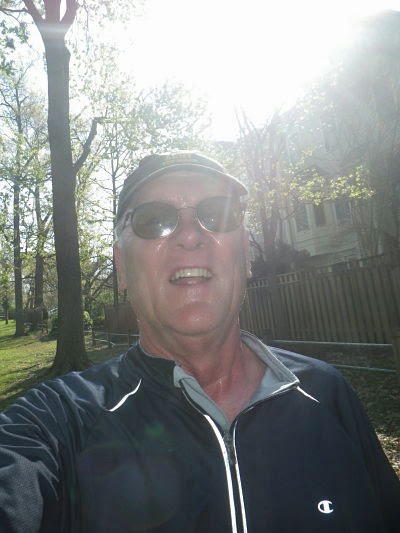 And with Obamacare, now he can get health insurance too.  Is this a great country or what? 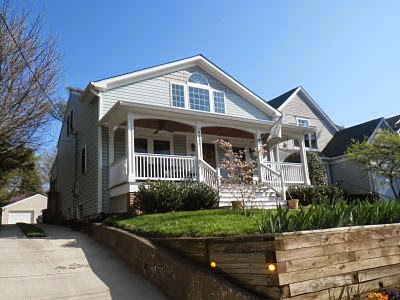 It was a great run, going into Arlington through parks and past the two houses we used to live in.  And it's always beneficial to hear news, any news, about your children. 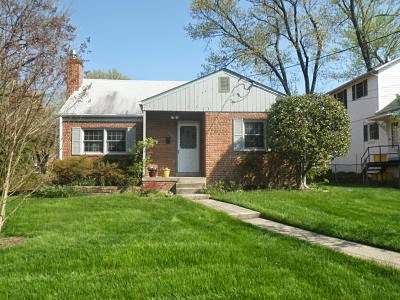 Meb.  The mere 3-letter name says it all.

You see, tragedy visited this great race, the Boston Marathon, the oldest continuously run marathon in the world, last year when two immigrant men planted bombs upon its course and killed and maimed people as was their sole intention.  Men who had come here as boys, benefited from all the advantages our great country has to offer, and found hatred inside of themselves instead of reaching for greatness as Meb did.

You see, Meb came here as a boy too, as a war refuge, ran track in high school and then at UCLA where he won national championships, became an American citizen and continued on to greatness as an American marathoner.  His name goes up there with other great American male marathoners such as Frank Shorter and Bill Rodgers.

It's no secret that Africans are the best marathoners in the world currently, with Kenyans especially standing out.  No American had won a major world marathon in decades (London, Berlin, Chicago, New York and Boston); a Kenyan usually was standing atop the podium.

Until Meb astonishingly broke through in 2009 and won New York.  The Africans let him get far out front and then couldn't bring him down at the end.  (My former running buddy A met Meb the night he won New York.) 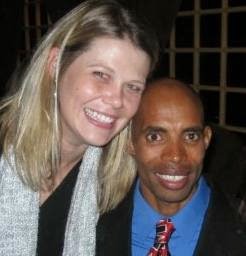 Meb outran all his pursuers at New York, they were asking each other what his strengths and weaknesses were and nobody in the chase pack knew, so lightly did Africans regard Americans.  He was strong, Meb strong.

His time has never approached 2:05, which is a time which the elite Africans regularly reach and once, an American (Ryan Hall).  He PRed yesterday at 2:08 (at age 38), his prior best was a 2:09 when he won New York a half-decade earlier.

He is a consummate professional, unfailingly polite and gracious, and a master tactician.  He won a silver medal at the Athens Olympics in 2004 and came in fourth at the London Olympics two years ago.

I personally thought that was his swan song, at age 36 he had won an Olympic medal, an American major and he outdistanced a world class field at London save for the tight lead pack of 3 medaling African elites.

I came in from a noontime run yesterday and immediately googled "Boston Marathon 2014 winner."  When the name Meb immediately popped up I was astonished and proud.  (I have met Meb twice at DC races.) 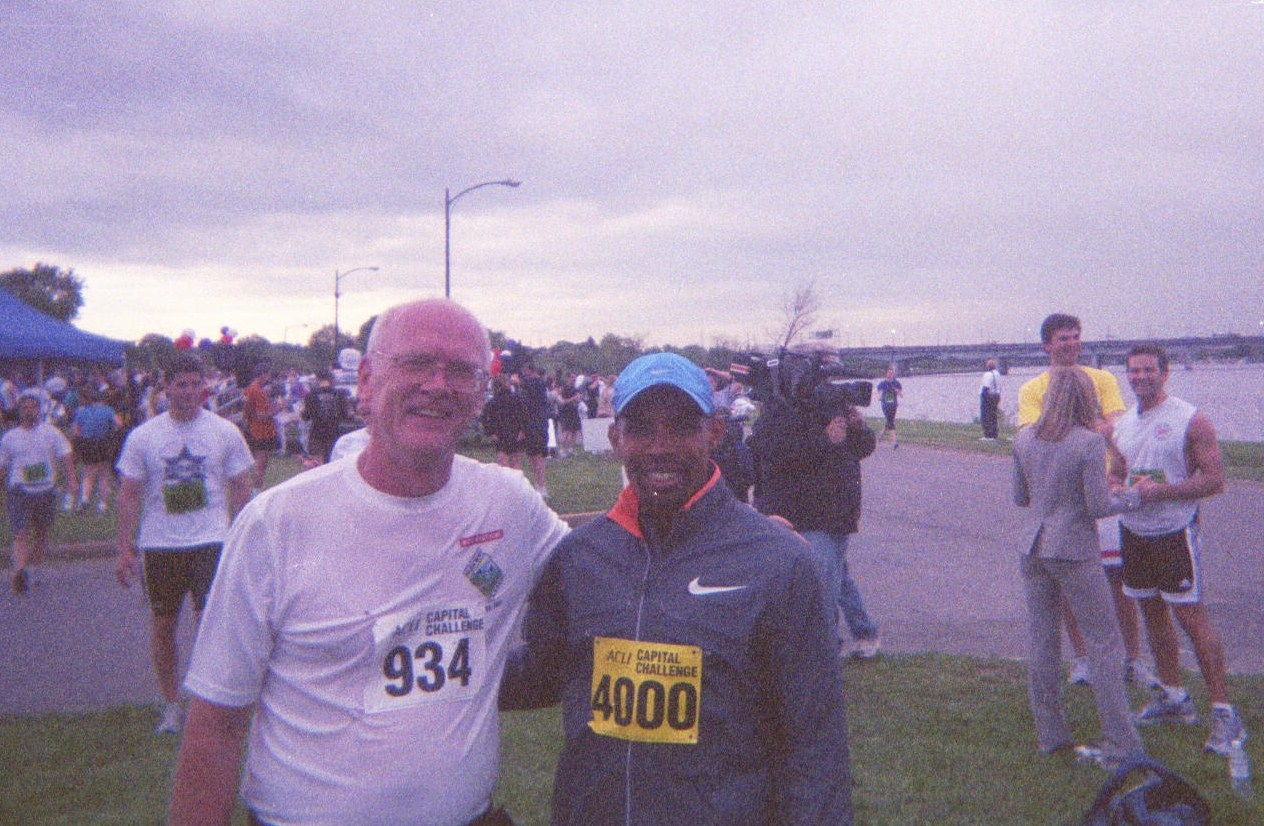 I eased my vehicle down the bank's ATM car lane, hoping to use its single ATM machine.  There were two people already using the ATM, both pedestrians standing on the 3-foot cement skirt suitable for interloper pedestrian utilizers of the ATM machine.

I recognized her immediately.  Super platinum blonde (she should be grey like me), heavily lined face (she's older than me), she was standing submissively, or perhaps dominantly as befits a shrew, behind her current husband, who was crouched over the ATM machine working it for cash, apparently.

My ex.  The woman who destroyed my relationship with our 3 precious children through her manipulations upon these vulnerable minor children during six years of ruinous divorce litigation she initiated and drove along with her coterie of paid whores, "professionals" (you murderers-of-childhoods and family-destroying enablers know who you are).

I drove on by as she glanced at me and then looked away with no apparent recognition; obviously she doesn't recognize my current car.  But I saw her clearly and experienced NOTHING, not hatred for her ruining my life (or rather, my children's lives) nor nostalgia at over twenty years living together wasted (she was ice-cold) nor rage at her some-would-term-it abusive treatment of my children (classic PAS) nor pity for her at her soon-enough accounting for her worldly actions in depriving our children of their father and his family at St. Peter's gate.

I forgave her years ago, and now she is nothing to me.  It was so clear to me as I drove by this wreck with no feeling whatsoever.
Posted by peter at 20:26 1 comment:

Today is THE day, the day I started working towards when I graduated from law school 24 years ago in my late 30s and went into government service.  Being able to get my family of five, with two of three children with pre-existing conditions and a wife with expensive utilization of mental health provisions (we were kicked out of our Blue Cross/Blue Shield plan for using covered services), into the government's gold-standard health care plan (basically its single-payor, and it works mostly great), had everything to do with my mid-life career choice.

Only in America would the health-care industry boot an asthmatic two-year old toddler, a sickly one-year old baby and a panic-attack stricken adult out of their existing, fully-being-paid-for plan into Virginia's catastrophic individual family policy which I quickly found was an expensive (ruinous) joke akin to a pay-fully-for-everything-as-well-as-triple-the-former-premiums "plan."  I'll meet those health care plan industry executives in hell, along with all divorce lawyers except my own, when I'm done with this life.

I hear the gentle patter of rain falling outside.  It rained on my wedding day too, 37 years ago.

My three children, the ones I struggled to get proper health insurance for, for whom I purchased tuition plans for with them as beneficiaries that paid 100% of their college tuition and fees using money given to me by my mother, haven't spoken to me in over half a decade nor any member of my family in over a decade.  Only in America.

In 2010 I took a retirement seminar just to see what the possibilities were despite knowing that I would have to work till I died after the five-year divorce litigation destroyed me financially pursuant to her nefarious and sick-minded plan.  I discovered that the maximum enhancement for my retirement formula, insignificant as it might be, accrued on 4/15/14. 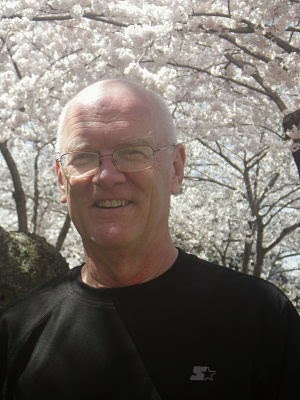 Any time worked past that date gilded the edges slowly for sure as the years droned on, but that date became emblazoned in my mind.  It's here.

Almost all my college friends have retired or are retiring this year.  But I can't afford to retire, yet.

After living through a life-altering modern western divorce, and the calamitous (in so many ways!) Dubya presidency, perhaps next decade, or next year.  Or perhaps next month, or tomorrow.

But I'll go in to work today and keep at it, working under the supervision of my thirty-something managers.  After almost four decades of work at jobs ranging from dishwasher to bartender, cop to lawyer, I know one thing foremost among many things--that managers are in it primarily for themselves.

My few friends who really know the workings of my mind say that I don't have a plan, I have a date.  But it has arrived, hasn't it.
Posted by peter at 04:05 No comments:

On Sunday afternoon I ran my first race of the year, my first in almost a year, a 5K on the W&OD Trail in slanting sleet, in the winter that won't end.  The late-bulletin notice from the race director said the rain (it had rained all morning) was predicted to end an hour before the race began, which it did.

That's when the the snow started.  If I hadn't already paid $35, I wouldn't have run it.

But this race is a mere half mile from my house so I've run it three straight years, ever since I returned to running from my two-year injury layoff.  In 2011 it was my first race back, and I barely squeaked in under thirty minutes, which was my goal, at 29:30.

I got progressively better the next two years, at 27:53 then 27:23 and second in my AG.  I was beat out by another former president of the DCRRC who is also discontented with that club's direction, my friend Bob Platt.

With ten minutes to spare, I jogged down the trail to the start and got my racing bib.  It was cold, in the upper 30s, and the blacktop trail had a layer of slush on it the consistency of wallpaper paste. 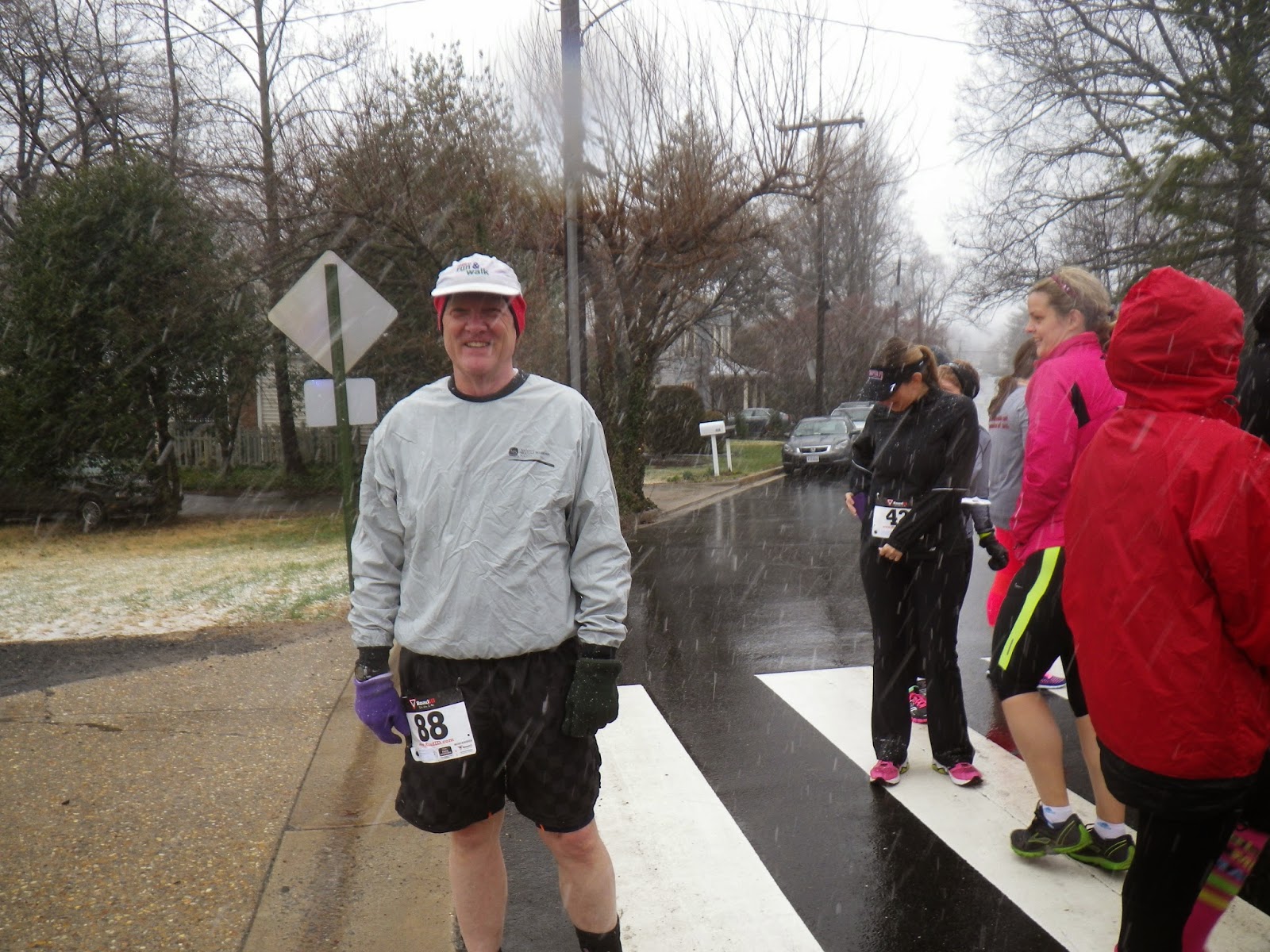 The race is held each year in memory of Walter Mess, the driving force behind the creation of the W&OD Trail, who was an OSS agent during WW2.  Kicking off this year's race was Roger Neighborgall, a Ranger who stormed Fortress Europa with his comrades on D-Day (on the left presenting a memorial to the Mess family pre-race, on the right is race director Jay Wind). 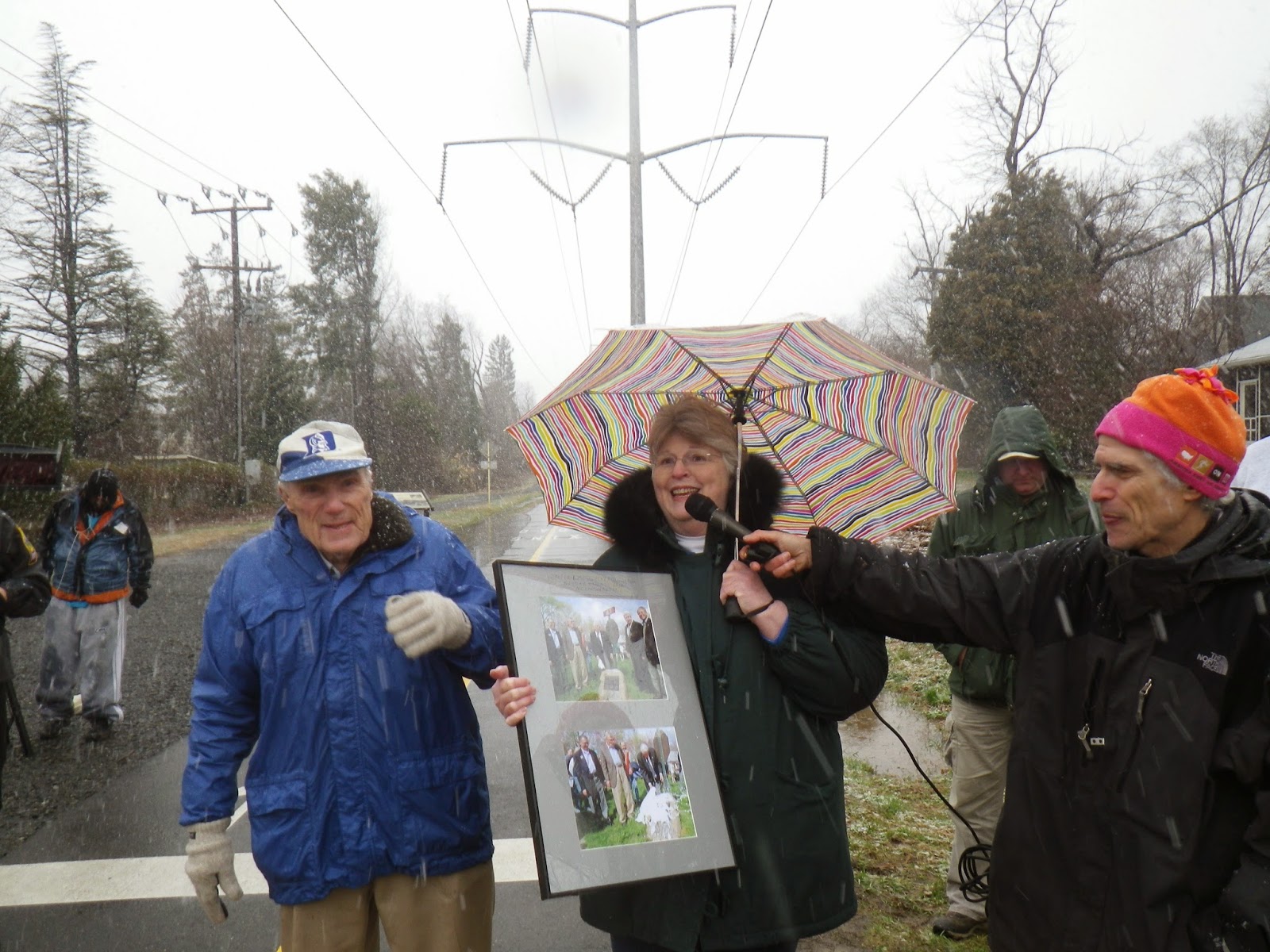 And then we were off, running into a slanting sleet the wind was carrying into our eyes.  Half a mile out we went over the very slippery wooden bicycle bridge over Leesburg Pike. 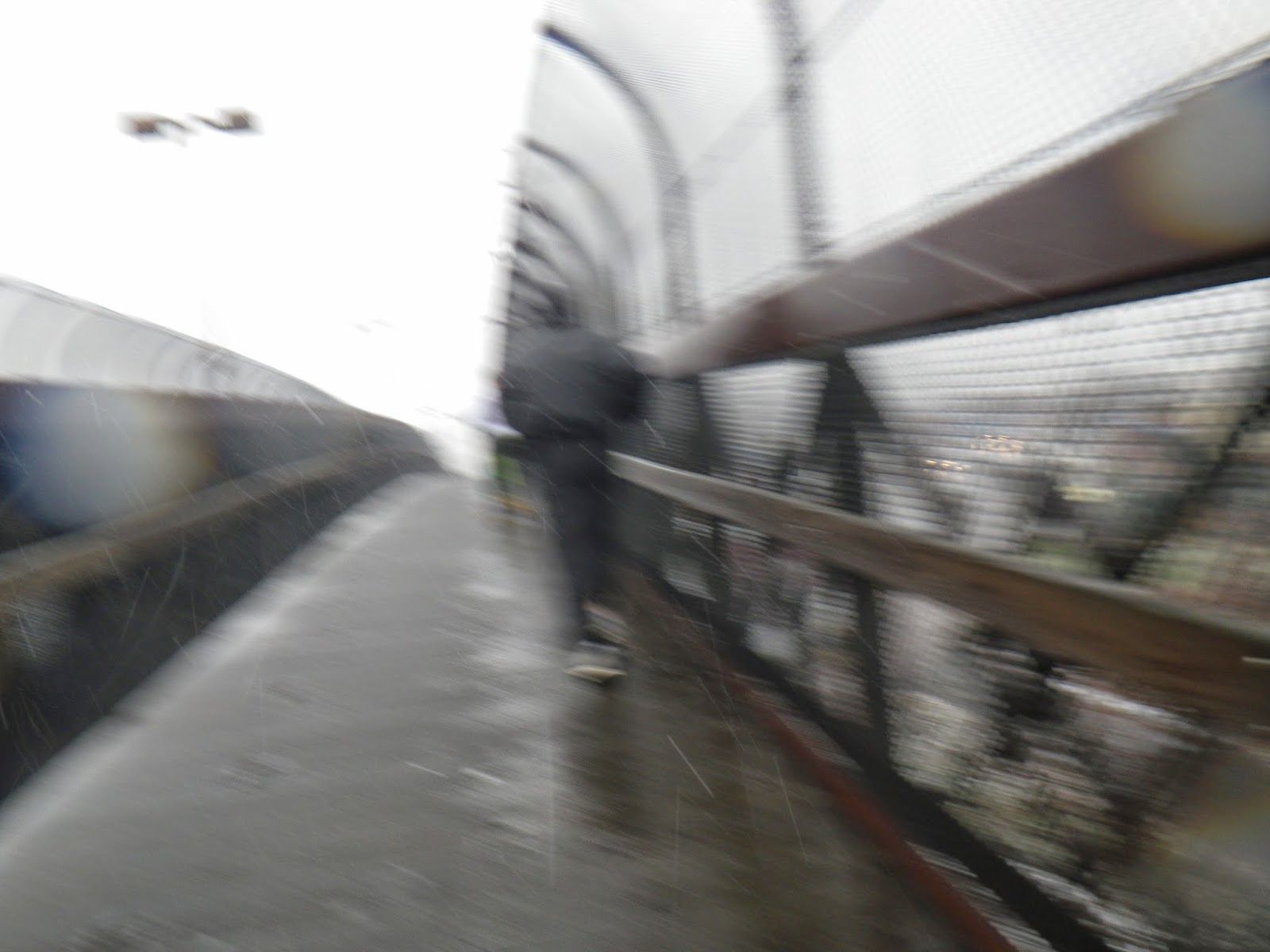 By then the position of all other racers relative to me was pretty much set.  Only one person passed me the rest of the way, a woman in colorfully striped knee socks, while I subsequently passed two men. 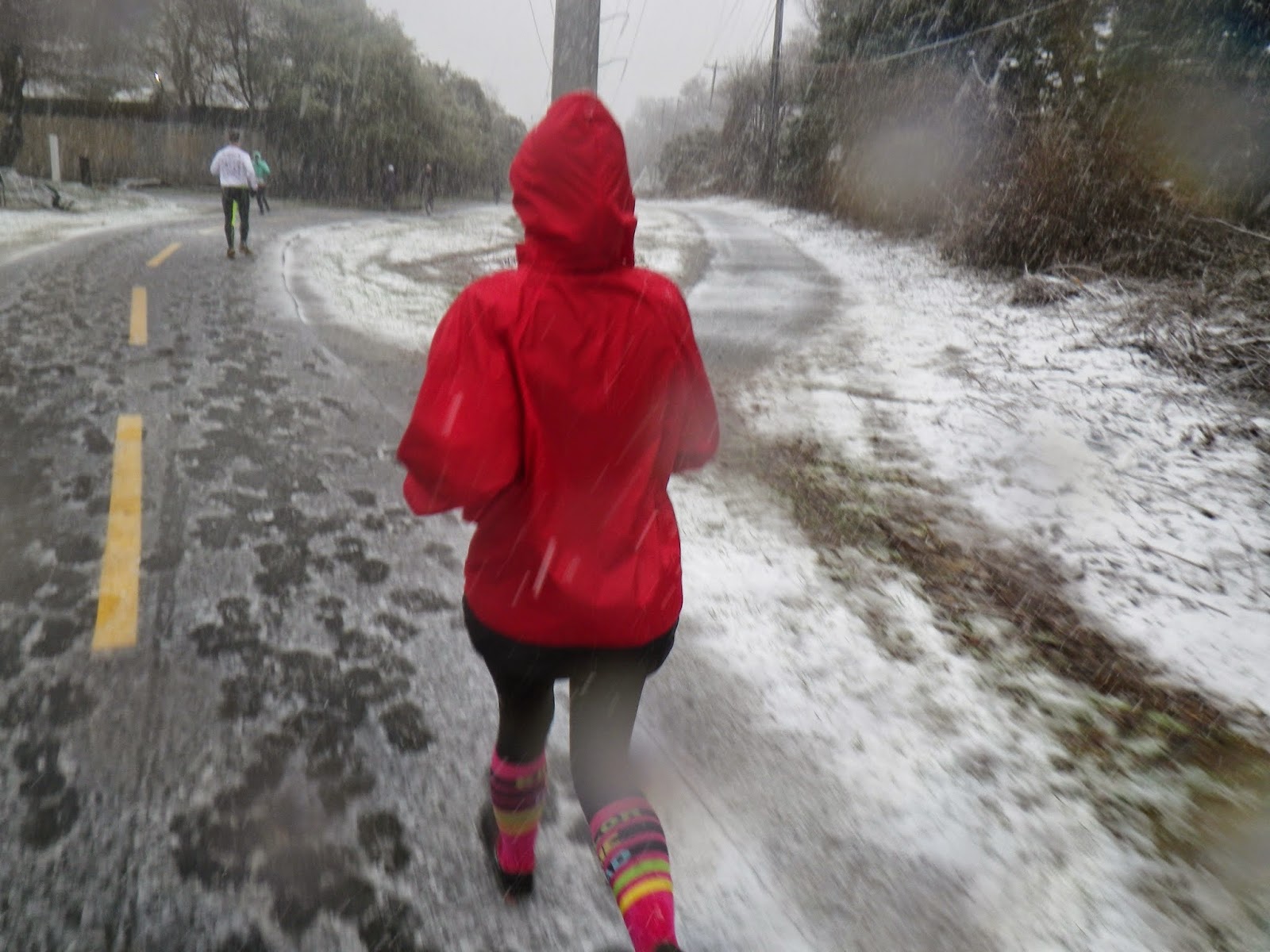 After the first doubling back on the trail a mile out, the wind abated because it was behind us.  Going over the Bicycle Bridge a second time was worse than the first time. 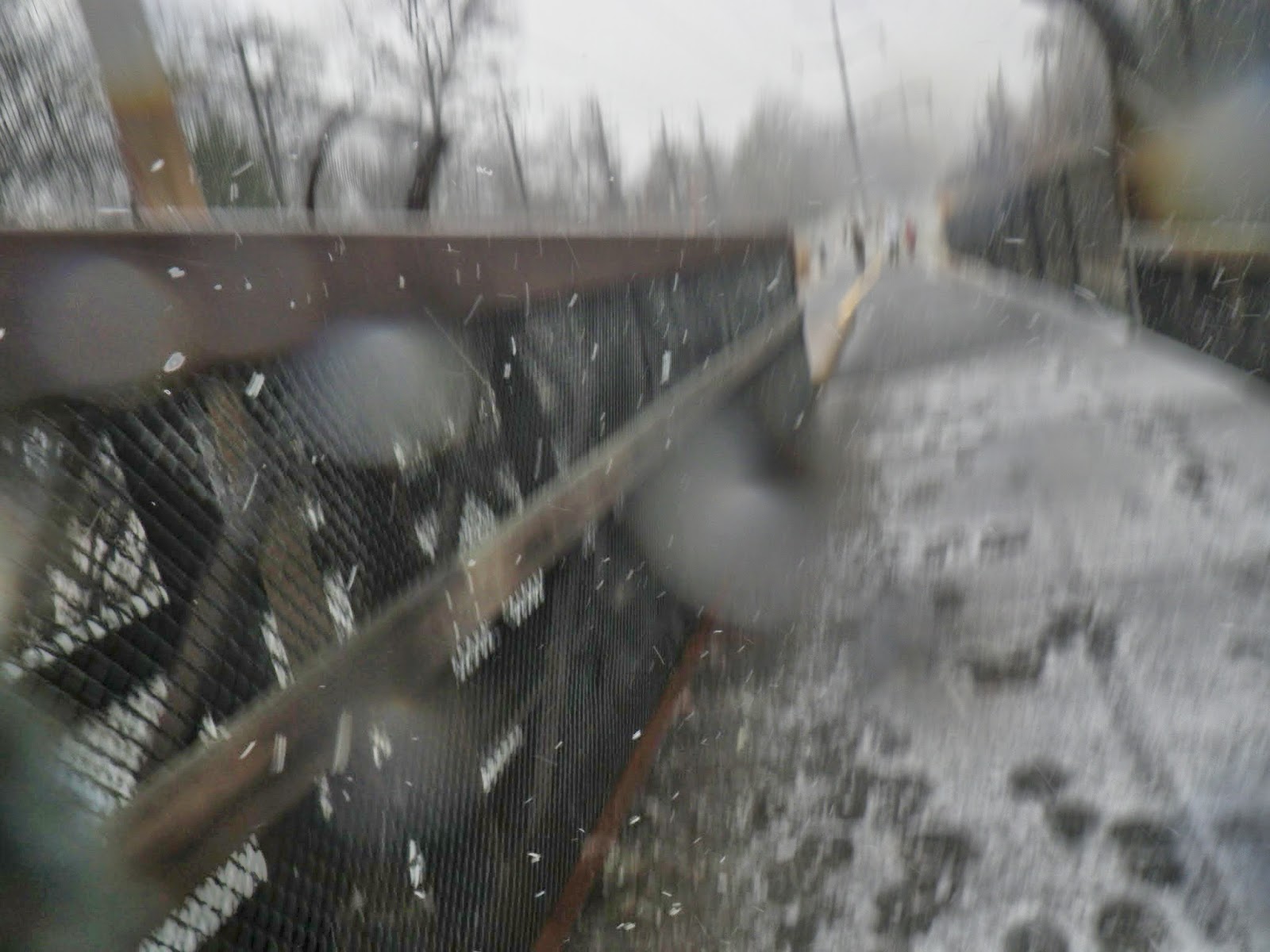 Tantalizingly, we passed the start (and finish) line at the two-mile mark and went a further half-mile.   The race winner, local legend Ted Poulos, passed me in his stretch run going the opposite direction. 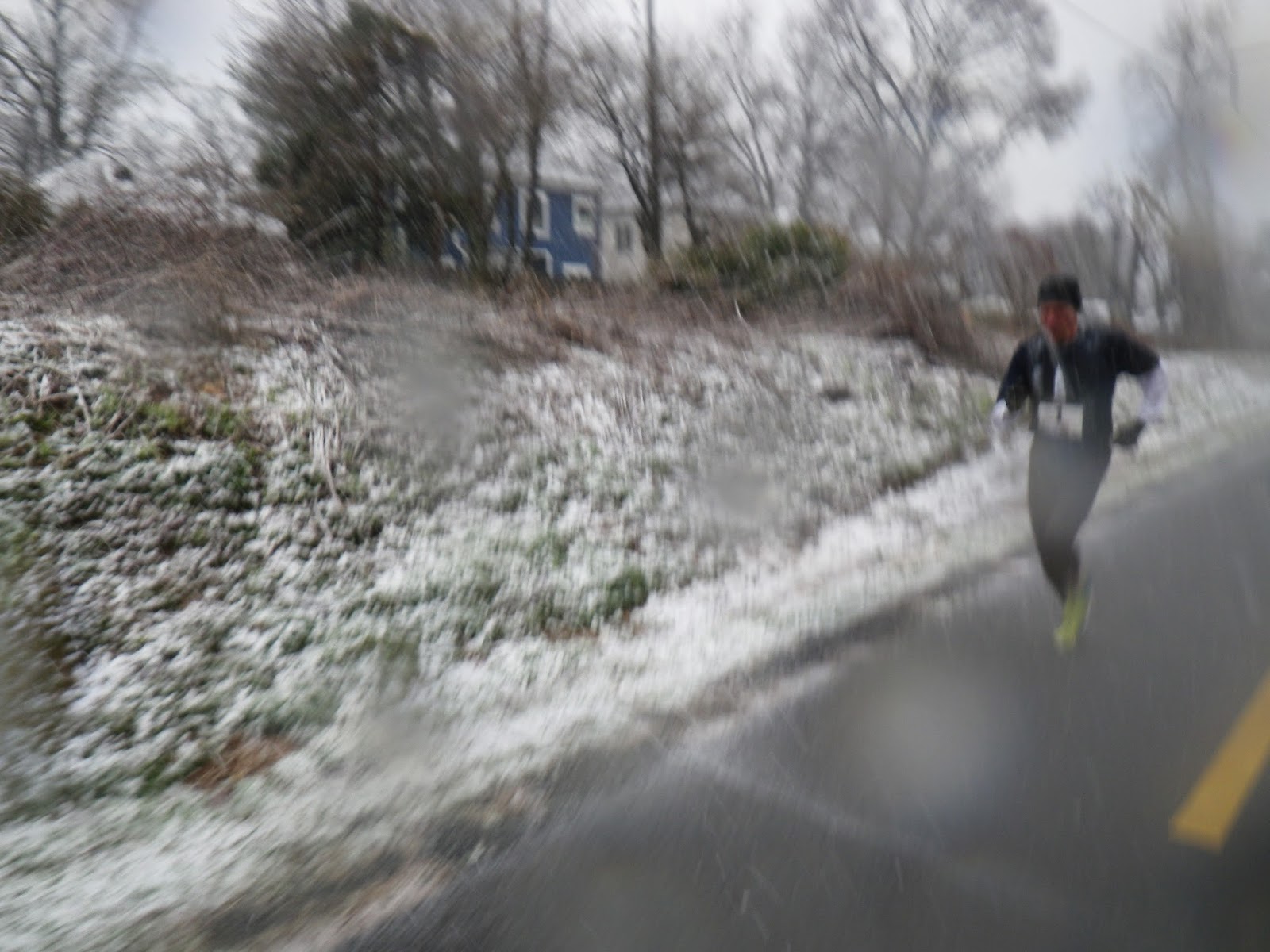 He was being chased futilely by a 22-year old boxer, merely cross-training, who came in 2d less than a minute behind.  Shortly after the viewing pleasure of the unfolding front end of the race, I reached the far turnaround point and headed back into the wind for my stretch run, dipping my ball cap so that the bill would keep the stinging sleet out of my eyes. 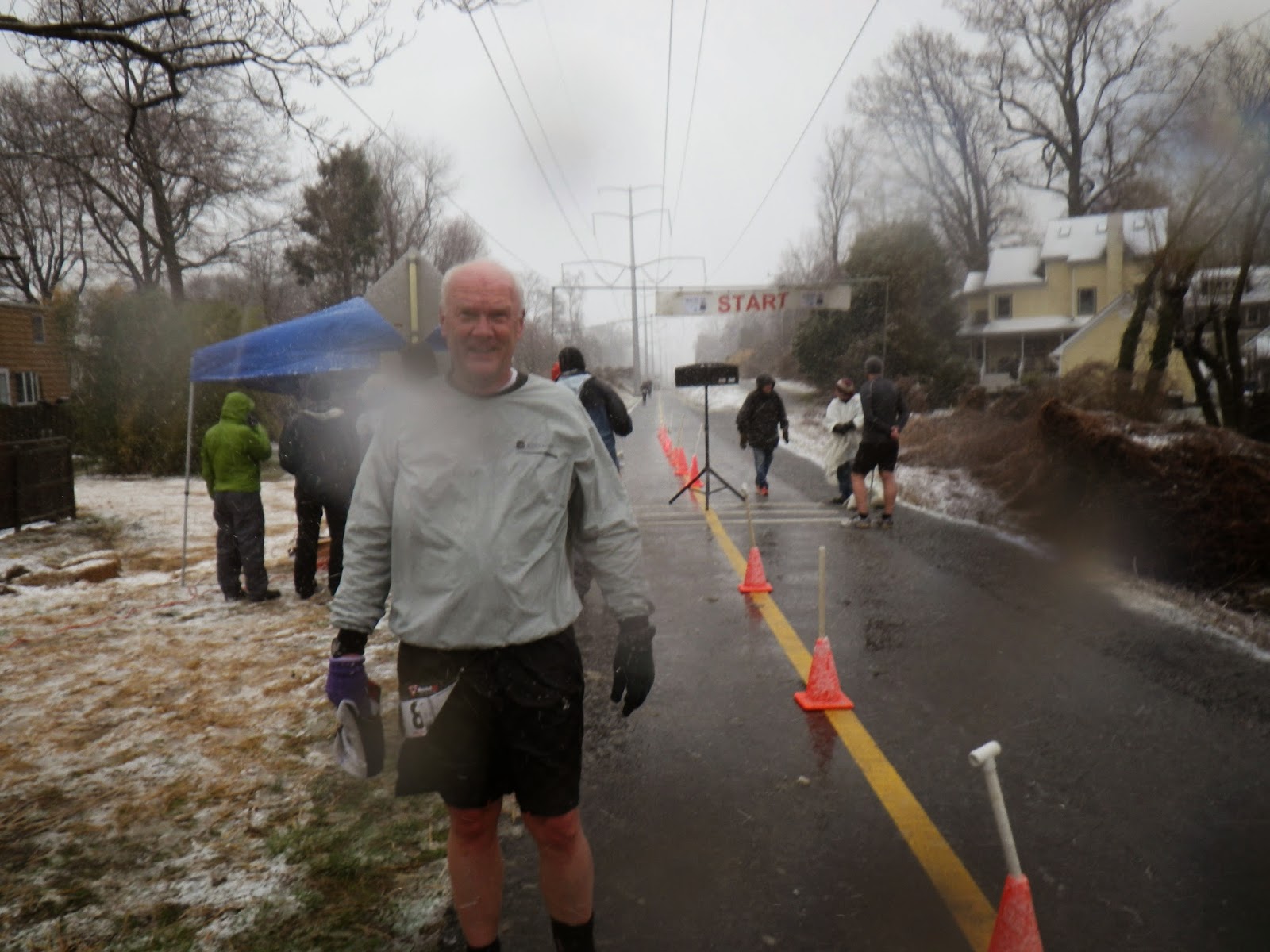 I pushed it across in 28:30, my 4th worse 5K time ever but a delight to me because I have returned to running after a layoff in 2009-2011 and the conditions were so chaotic that they were fun.  To cap it off I took 3d in my age group--out of 3--, being presented with a certificate for $25 off a pair of shoes at a running store in Baltimore, for my award winning finish at the Potomac River Run Marathon, expires 12/31/13.  LOL.  (The lonely boxer in his runner-up run.) 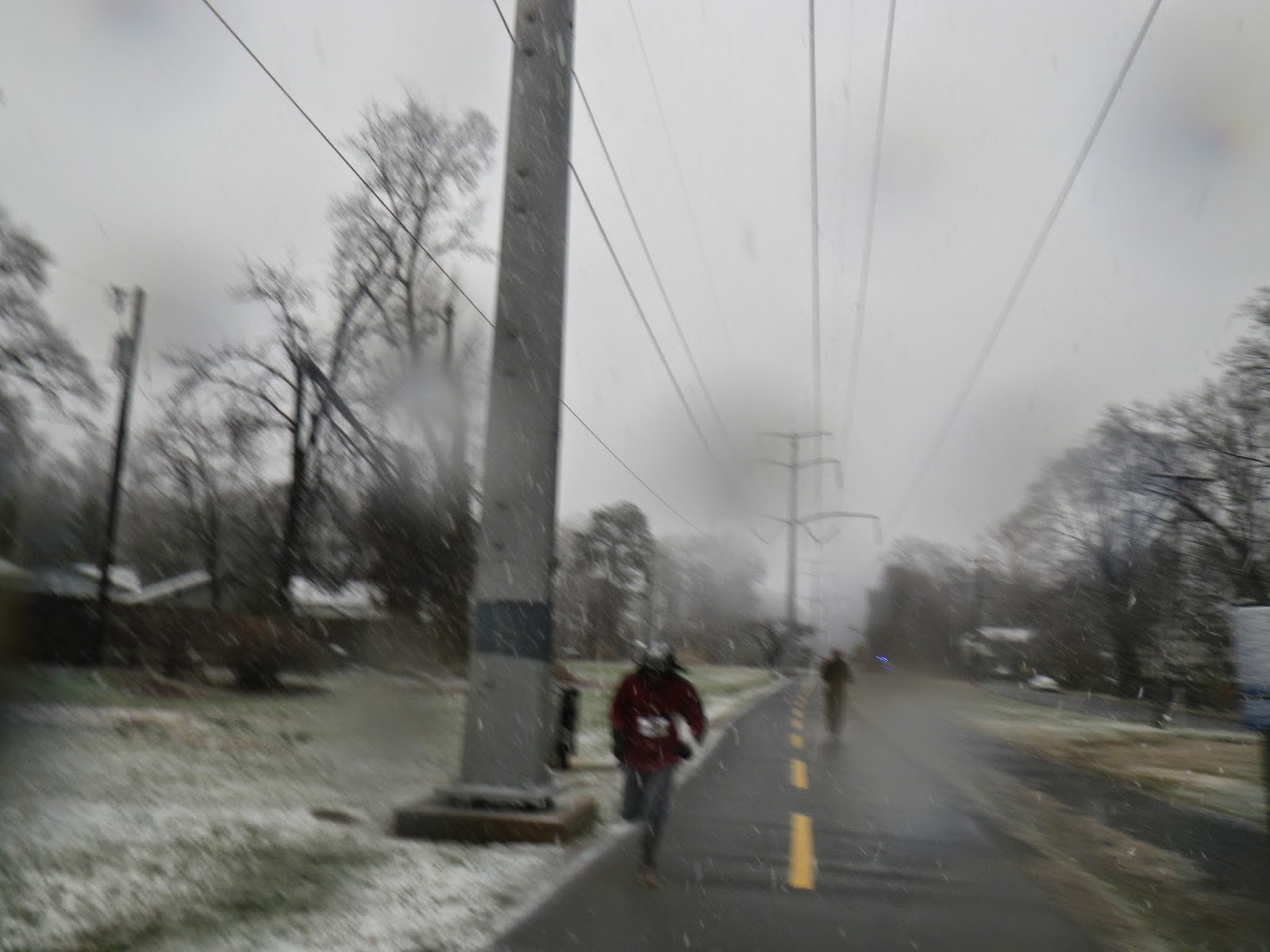