What you see when running

Although it's been a mostly temperate summer, we've had a hot, humid spell here at the end.   I've been struggling mightily with a cold which has invaded my chest and I haven't run for a week to aid my recovery.

Yesterday I finally got back out there, running a mile in the blistering, sopping heat of the noon hour with a running buddy who was returning to work after maternity leave.  She hadn't been running either for awhile, and we walked the mile back.

My last run before yesterday was a few miles about a week ago in Falls Church and Arlington, in the morning before the day heated up.  I was enjoying watching the people I ran past, other runners going by, a househusband walking and cleaning up after the household dog, a Muslim praying on his mat behind the 7-11.

At about 7 a.m. a cherry red Ford Mustang convertible drove by with its top down, a youthful chariot for an old woman, the roadmap of lines criss-crossing the driver's face belying her wind-tossed bleached blonde hair.  It sure was a nice brand new car.
Posted by peter at 07:56 No comments:

Twelve years ago I was on the subway when I heard the PA announce that the Pentagon Station was closed due to the terrorist attack there.  Huh?

I arrived at work shortly thereafter, to pandemonium.  Workers in my building were roaming the halls looking for a safe place to go, because there was a report that another plane was incoming with a DC building as its target.  Huh?

I fired up my computer and saw, to my horror, that the WTC towers had collapsed.  Huh?

We were at war.  With who, Afghanistan? 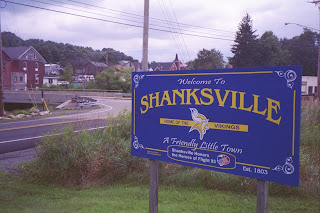 Federal workers were discharged into the DC streets with orders to go home.  Since it was thought (erroneously) that Metro was shut down, we all streamed towards our homes on foot.

I lived 10 miles away in Virginia, and walked home.  Going over the Key Bridge, looking southward looked like a scene out of Beirut, with a huge plume of smoke curling lazily into the sky over where the Pentagon was.

Booms were heard.  The street rumors were that they were car bombs going off in front of federal buildings (erroneous); I now believe they were sonic booms generated by fighter jets finally arriving over the nation's capital way too late.

America was never the same.  For instance, you can't just walk into a building anymore.

I knew people who were killed in the ensuing (and continuing) war(s).  The misnamed Patriot Act became law and stripped down our personal liberties, casualty rolls are horrific, torture became policy and our drones rain down death from the skies overseas (what goes around...).

At home, our departed liberties are not coming back anytime soon.  And I started paying attention to and learning about a large religion, although I struggle mightily to understand it and comprehend the secondary place it assigns to women.
Posted by peter at 22:15 No comments:

I'm a parent, you know

My sister called, and her daughter, my niece, is getting married next summer on the left coast.  I said I would try to be there.

Then my sister started the most tortured conversation I've had in awhile, saying how her daughter wanted the full extended family there if they wanted to be there but there were a few cousins she hadn't really heard from for awhile that, well, maybe she didn't want them to be there.  She had discussed it with my sister and my sister was bringing it up with me to see how I felt about it.

I'm always ready to give advice and I'm thinking, Harley's kids?  Those parents got divorced and maybe those were these the cousins my sister was going on and on about.

It took a couple of minutes for the light bulb to finally flash on, because men are obtuse and I'm a man.

She was talking about my kids.  Nobody wanted Jimmy, Johnny or Danny at this wedding nohow noway because, well, they were trained as minors to loathe all Lambertons.

The interminable quarter million dollar divorce, you know.  Those 3 boys haven't spoken to me in six years nor a single Lamberton in ten years.

This was a gob smacker, how my family views these three rotters (as my divorce lawyer used to refer to them privately when, as minors, they were busily suing me).  I have been slowly dribbling these children out of my heart since I discovered forgiveness five years ago and have since been working through travail, and character.

I said the wedding was about my niece and not my children, and I had no bad feelings about this Lamberton progeny wanting to exclude these three putative Lambertons from the wedding list (at least one has since changed his name, so is he still a Lamberton?).  I was touched that my niece thought I needed special care regarding those three.

But I am also sad.  Sad and deep as you (Traffic). 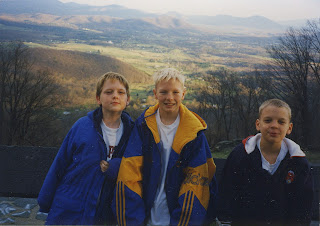