I developed a plan for training for the half marathon coming up in mid-September, really I did.  It just had no wiggle room, and reality intruded.  (This is when I fell the first time.  I was so busy taking pictures during a "Run with a Kenyan" run on the Mall during the African festival there that I tripped on an uneven sidewalk and went down hard.) 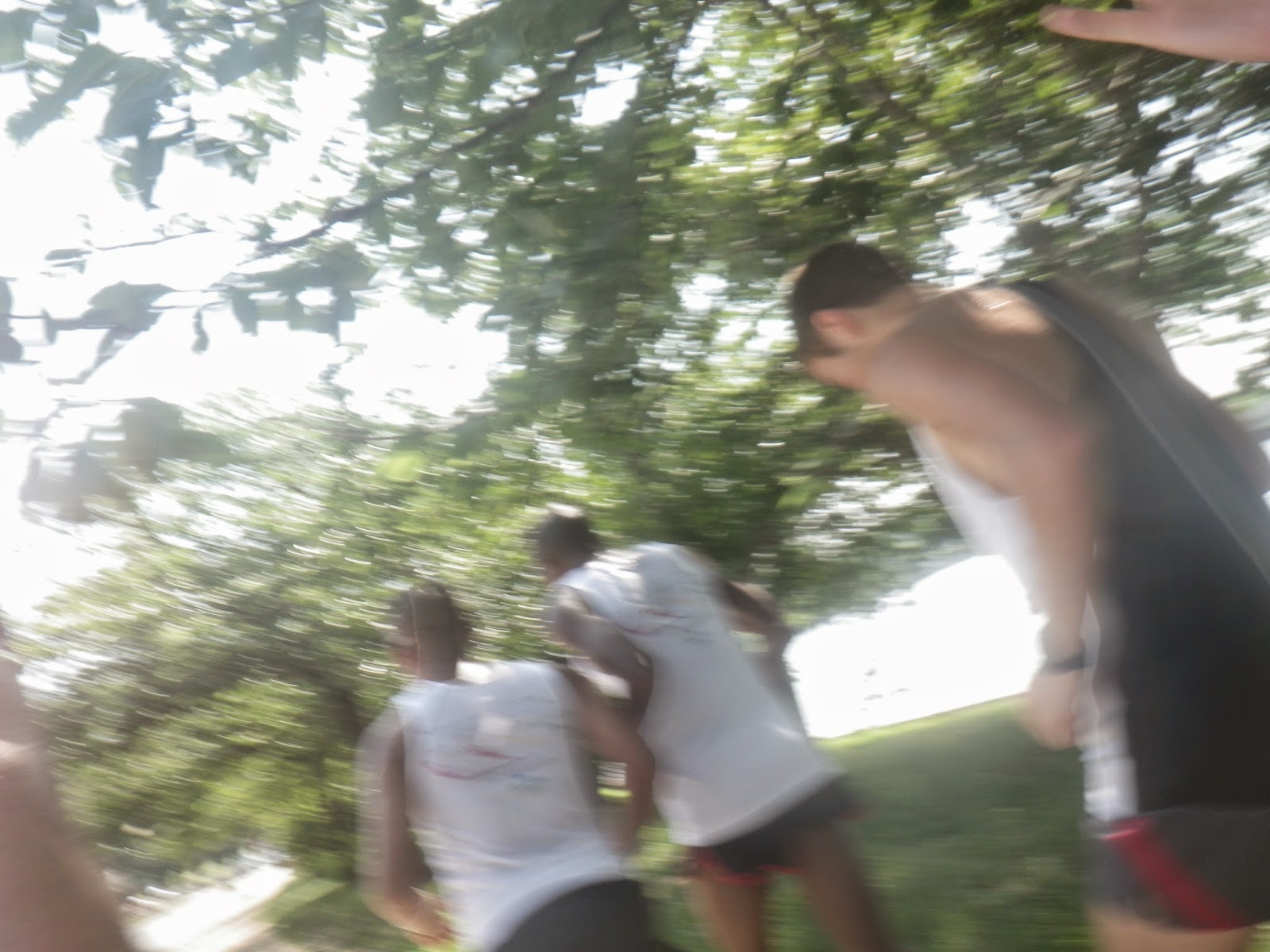 I had a base already of around six miles.  In my twenty-week plan, as I used to do when coaching, I ran the weekly long runs "up the scale" from six miles to thirteen by race day, with step-backs every three weeks for consolidation purposes, as the following chart shows, each number representing miles for the long run on the weekend:  6-7-8,-7-8-9,-8-9-10,-9-10-11,-10-11-12,-11-12-13,-8 (taper)-race.  Plus of course running the normal shorter runs of 2-6 miles two to four times a week.  (One of the short runs during the week.  We turned down the offer of a free Yo-Yo because it didn't seem like a good running snack and we didn't think the package would stand up to four miles in a sweaty palm or pocket.) 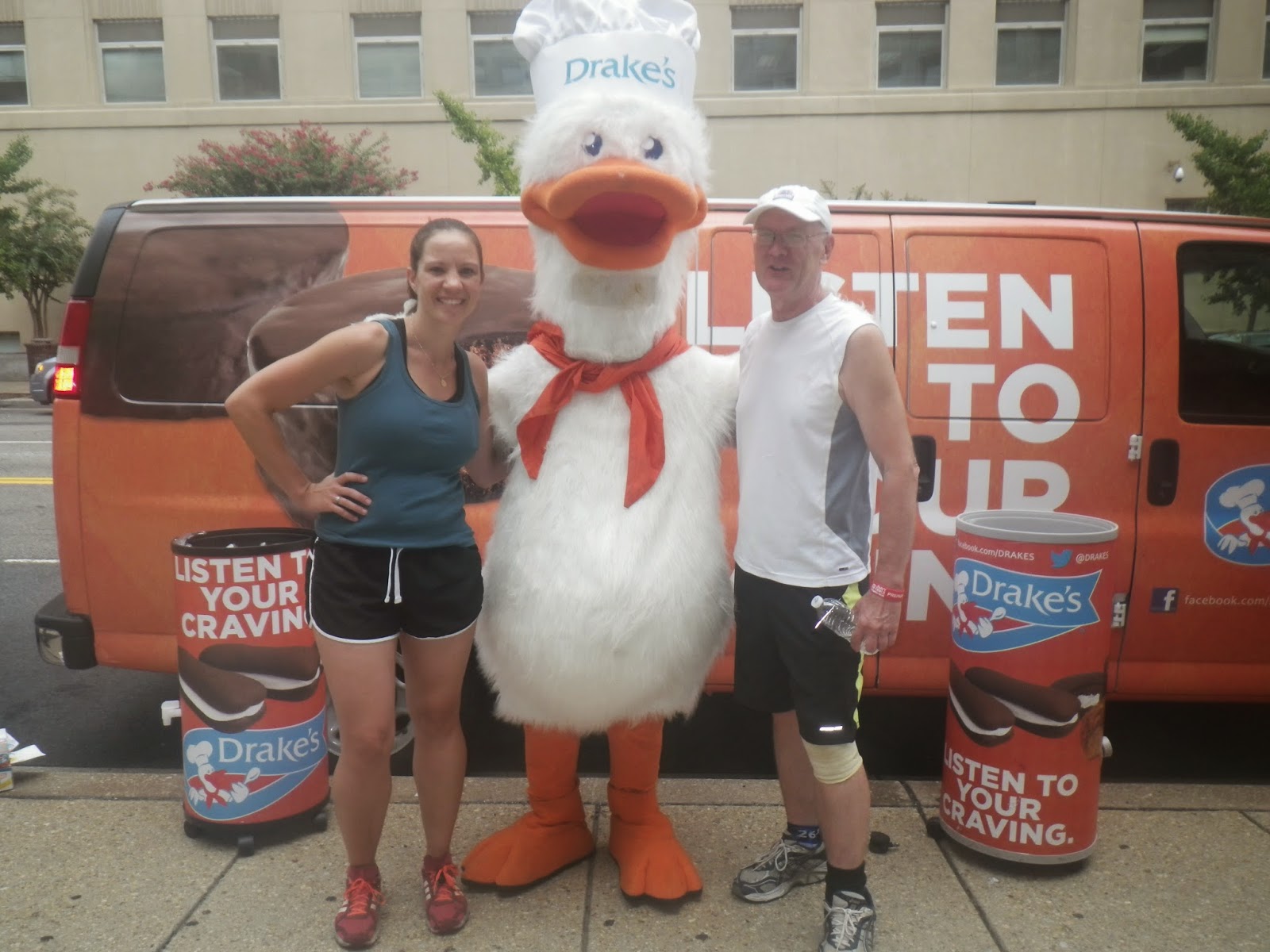 But naturally life intruded.  We've been really busy at work, doing more with less.  Lia, my running buddy & race partner, has children who need care, of course.   Our other race partner had setbacks which impacted her running.  I fell while running in DC and bloodied myself.  I fell while running in Portland and bloodied myself.  My knee swelled up on a long run and I took a week off.  I developed bursitis in my left knee, possibly as a result of the torque my leg underwent when I tripped while running those two times I fell, and I took another week off.  I started running with a knee brace in addition to my ankle brace and gobbled ibuprofen before each run.  (In Portland, I crashed into an unexpected mid-street curb that put me down.) 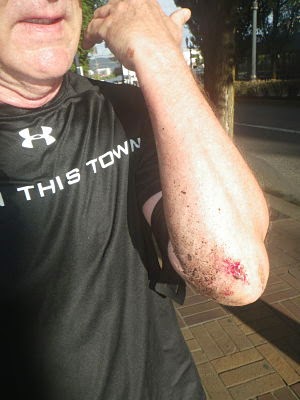 But WTH, I lined up on race day.  And despite the set-backs and anxiety that I wouldn't be ready, the journey to the starting line, those twenty weeks of preparation involving both highs and lows, was worth everything to me in my return to running.  (Ready to Rumble on Raceday.) 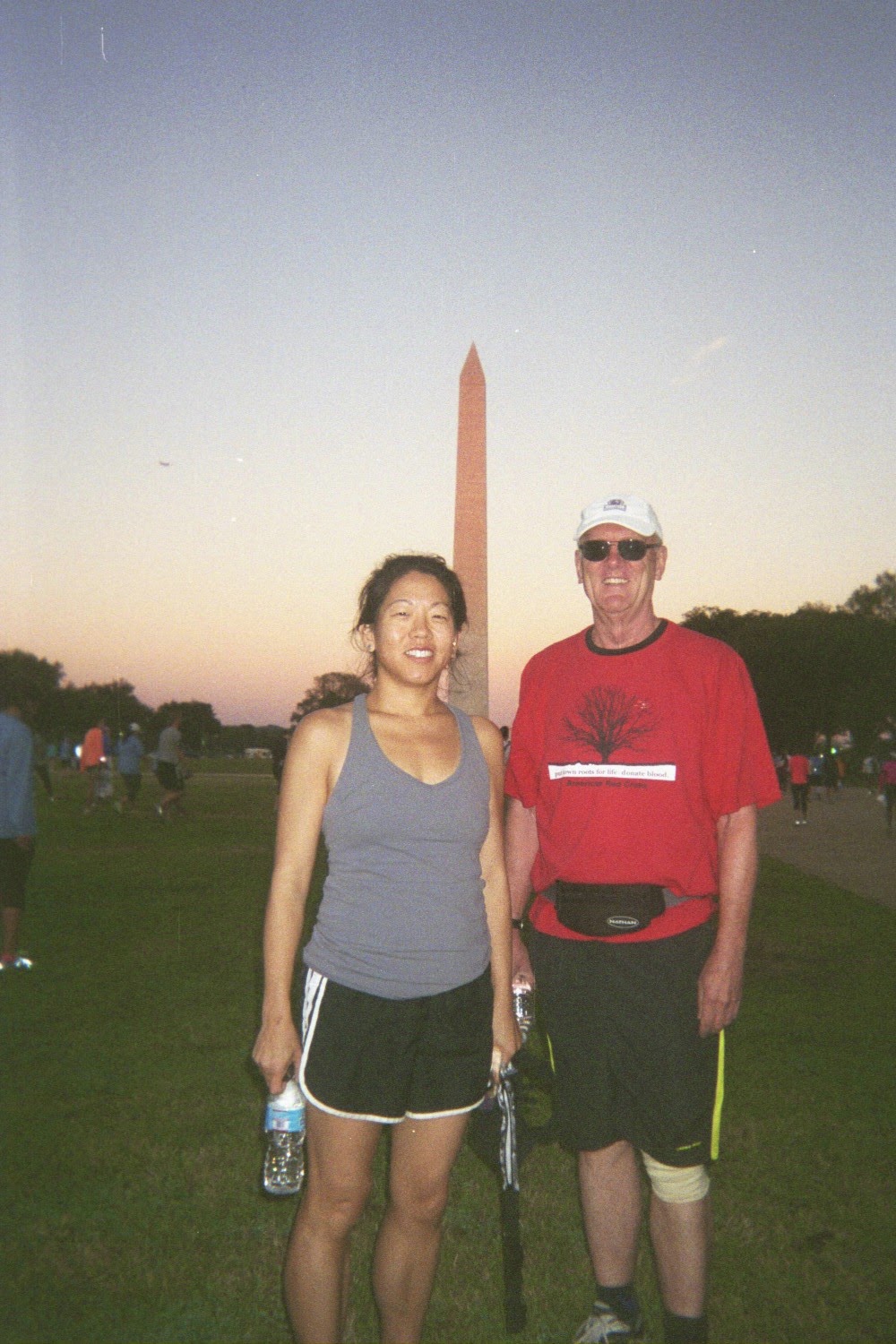 It's good to have friends.  Lia and I ran through 2011, 2012 and 2013.  Some other coworkers joined us sometimes, which I was glad of, because I believe in inclusion.  (Occasionally we'd do fun stuff like having ethnic food at the conclusion of a run, in this instance taking advantage of the Kenyan pavilion during a festival on the Mall.) 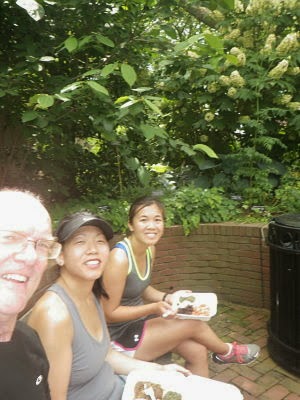 But I always enjoyed running with Lia best because my running buddy was my counselor.  We had such unhindered conversations as I sometimes sought and always valued her opinion on such disparate subjects as running club politics, religion and children.  Despite her much younger age she had such great common sense in addition to being uncommonly wise.  (A running buddy helps in overcoming wintertime blues.) 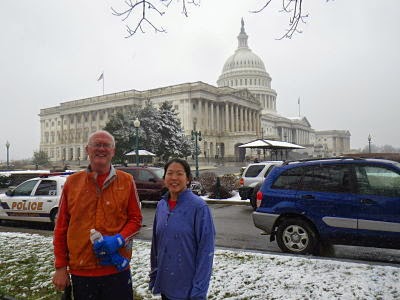 I became friends with the other regular noontime runners from work too.  We all strove to get faster or thinner or better together.  (There are countless interesting places to run past in DC.) 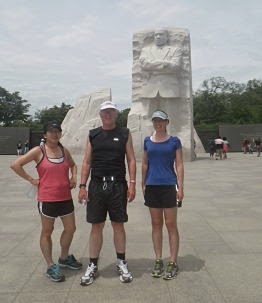 I was running the September HM, and Lia and another coworker signed up as well.  Good stuff!  (My very first digital picture with my new camera which I bought during the Federal Furlough last year, recording a noontime 5-mile run on the Mall with a co-worker, but we had no office to return to.) 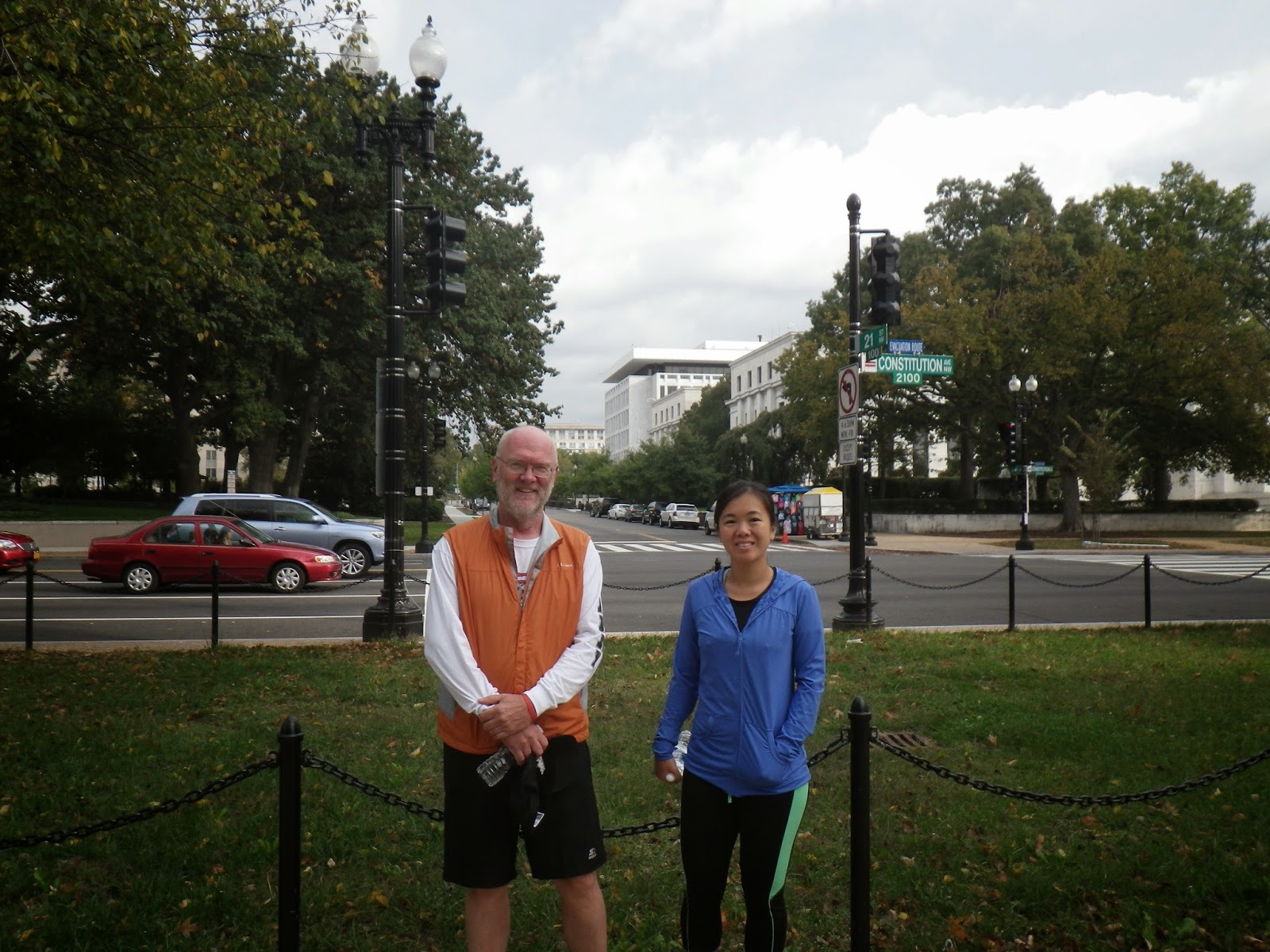 It seemed like a good idea at the time.  At a running expo I attended in March, I signed up for a half marathon in September.  I thought that would give me something to work towards as I returned to running after taking two years off and gaining a lot of extra weight.  (The early days of coming back.) 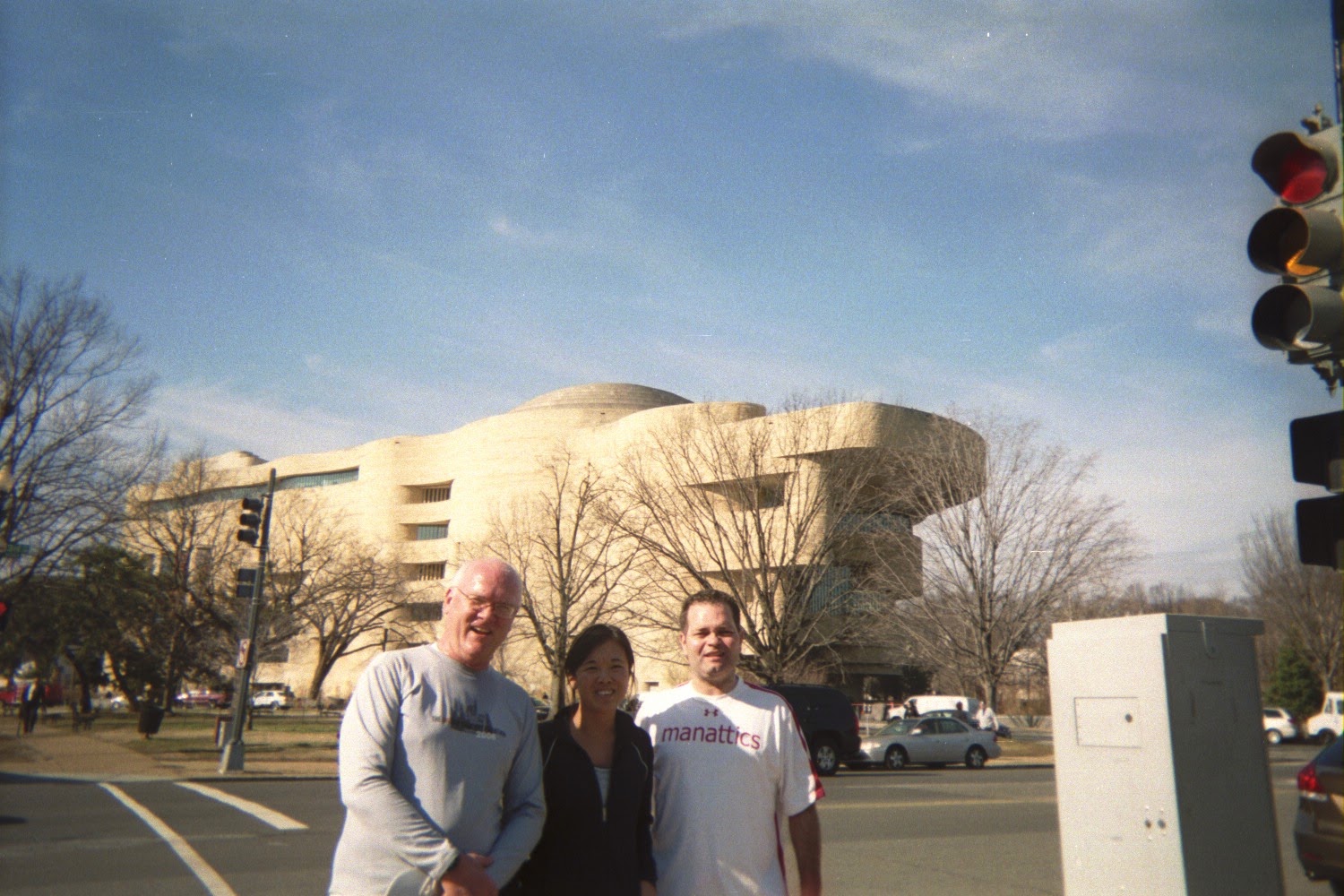 I had been running at a reduced rate for three years and dropping some of the extra weight but I had a long way to go to get back near where I used to be, which was running 30 miles a week and racing 30 times a year.  My main-stay was a co-worker, Lia, who became my running buddy on our noontime runs of four to six miles three or four times a week.  She was coming back from maternity leave even as I was coming back from my chronic ankle injury.  (A group of my co-workers heading out from the office for a noontime run.) 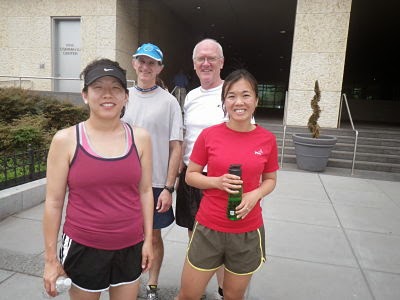 Our first efforts were pretty pathetic, running out a couple of miles and then sometimes having to walk back.  But eventually our 12-minute miles became 10-minute miles and we became able to run a six-mile route regularly.  Our pace improved to nine-minute miles or slightly better and recently my weight returned to within 10 pounds of where it used to be before my injury-induced layoff.  I bumped up my running from four to five times a week and my mileage from 10-15 miles per week to 15-25 miles.  (Lia was usually game to run, even during inclement weather.) 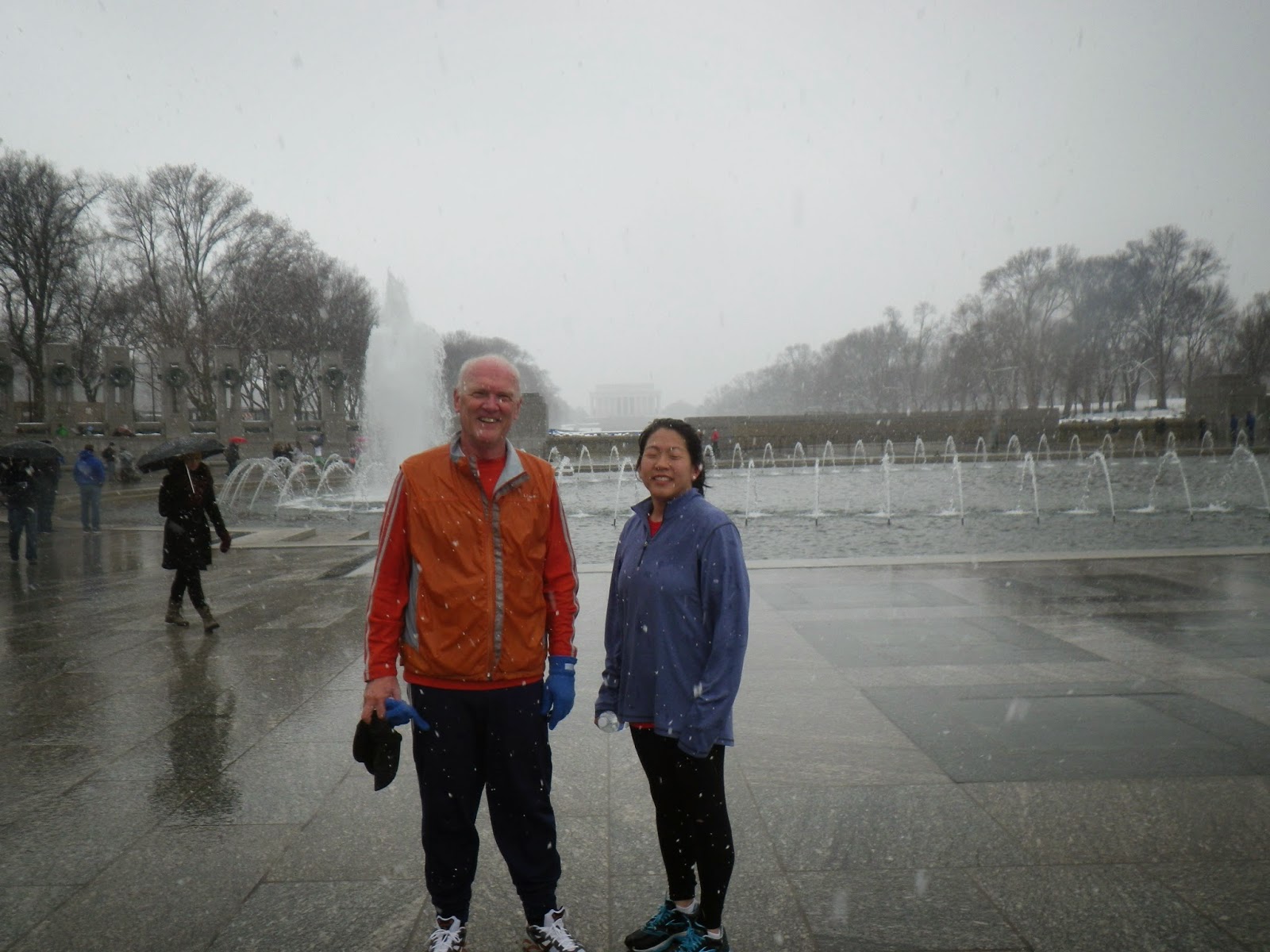 In the three years since my return, 2011 through 2013, I had run three sub 30-minute 5Ks and one way over 30 minute on a 100 degree day, a yearly Memorial Day 3K in the 16-minute range and a 50-minute five mile trail run.  I had a base of about six miles but the furthest I'd run in five years, my absolute long run, was nine miles one time.  The half marathon I signed up for in March, the Navy-Air Force Five Miler and Half Marathon on September 14, 2014, seemed like a good motivational tool to ramp up my game.  (We ran during good weather, too.) 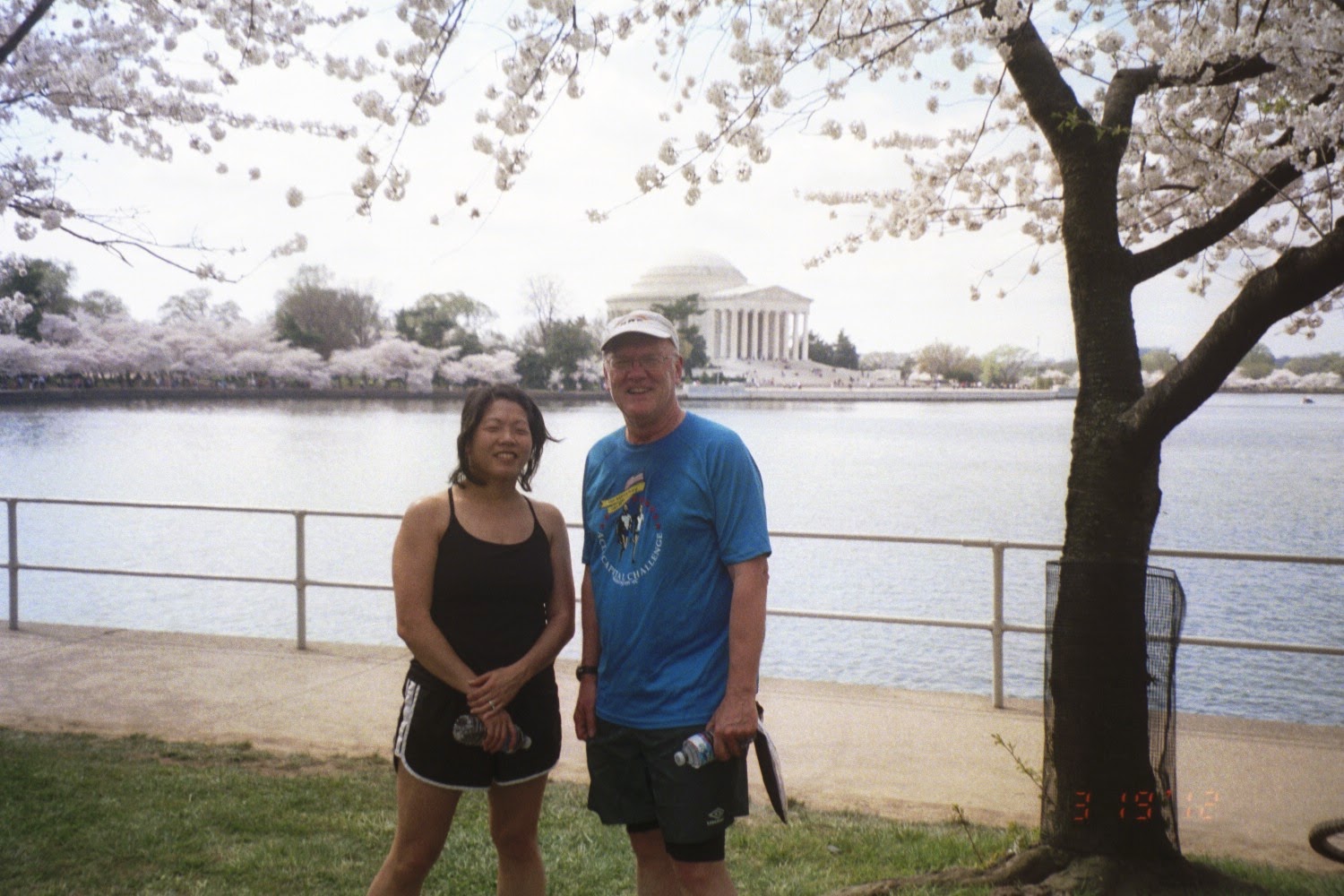