It was Cherry Blossom time in the District last week.  The blooms, as usual, were spectacular. 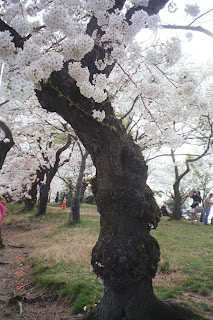 I'm taking off tomorrow, tax day, to celebrate.  After I donate blood for the 99th time in the morning, I'm going to have lunch at the Lost Dog Cafe in Westover at noon.  Anyone who cares to is free to join me. 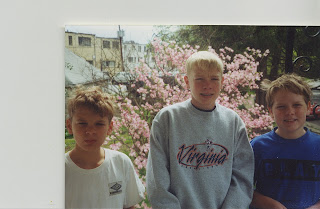 Richard II by William Shakespeare. What a garden of words! wrote critic Walter Pater about the history in 1889. The noted playwright was acquiring the power of language with which he would later infuse the protagonists of his great tragedies, Othello, Macbeth, King Lear and Hamlet, with their heroic personalties, intriguing pathos and complex characters.

The process of welding language and thought into a single entity was well begun in Richard II, first performed in 1595, noted critic Richard D. Altick in 1947. The play, about a weak king addicted to flowery speech as the personification of life who ran headlong into a cold, calculating realist who stole his throne, is the tragedy of betrayal as well as that of fallen royalty, noted critic Derek Traversi in 1958. Altick observed that the play centers upon the violation of the laws of blood descent, Henry Bolinbroke’s usurpation of the crown of his cousin, Richard II, in 1399, which led but to the spilling of precious English blood, the coming decades of internecine warfare known as the Wars of the Roses.

The play is a riot of speech. Shakespeare’s kings are an eloquent lot, Pater pointed out, and in "no other play perhaps is there such a flush of those gay, fresh, variegated flowers of speech," depicting Richard as an exquisite poet if he is nothing else.

The play contains several references to reverenced England: a scept’red isle, earth of majesty, seat of Mars, other Eden, demi-paradise, fortress built by nature, none finer than that described by John of Gaunt, Bolingbroke’s father, Richard’s uncle:

This precious stone set in the silver sea
Which serves it in the office of a wall,
Or as a moat defensive to a house,
Against the envy of less happier lands,
This blessed plot, this earth, this realm, this England. II.i.46-50.

Bolingbroke, who becomes Henry IV by his deposition of Richard, is banished from the realm by the rightful king in the beginning of the play yet treasonously returns to stage a successful mutiny. Bad a king though he is, Richard notes that:

Not all the water in the rough rude sea
Can wash the balm off from an anointed king III.ii.54-55.

The right of linear descent disordered by Bolingbroke’s actions, the usurpation, will beget:

Armies of pestilence, and they shall strike
Your children yet unborn and unbegot III.iii.86-87.

The Bishop of Carlisle prophesies that as a result of Bolingbroke’s intrusion into the natural order:

The blood of English shall manure the ground,
And future ages groan for this foul act IV.i.137-138.

Some in the play, however, are honor bound, and in the finest homily Shakespear offers on the concept of honor, Mowbrey states upon also being banished at the play’s outset:

Then thus I turn me from my country’s light,
to dwell in solemn shades of endless night. I.iii.176-177.

But the deposing of a rightful king occurs after Bolingbroke collects an army upon his return and ultimately triumphs over Richard’s forces, dispirited by Richard’s ennui. The strange king knows that ultimately there will always be sad stories of the death of kings, for kings live with bread like you, feel want, taste grief, need friends:

And nothing can we call our own, but death
And that small model of the barren earth
Which serves as paste and cover to our bare bones. III.ii.152-155.

And when the new king states to the present Richard in the deposition scene that he thought Richard was willing to resign, the former king reveals a bit more of his pathetic, poetic character when he speaks back:

Showing an outward pity: yet you Pilates,
Have here delivered me to my sour cross,
And water cannot wash away your sin. IV.i.239-241.

He has already earlier vilified his former subjects, so readily loyal to an usurper as dogs so easily won to fawn on any man, to Scroop his treasurer, who thereupon characterizes the true nature of blissful love turned to blind hatred:

Sweet love, I see, changing his property,
Turns to the sourest and most deadly hate. III.ii.135-136.

Richard cannot live, for alive he presents too much danger to the usurper, and when the natural order is no more, and when time is broke and disordered, and the sounds of the clock striking are clamorous groans which strike at the heart, Richard famously utters his sorrow at his wastrel life.  Indeed, it is commentary on the end of anyone's life:

Richard is murdered in his prison cell but first, perhaps for the first time in his life, he manfully rises up and kills some of his assailants. Henry IV faces down Richard II’s murderer, Exton, who did the deed pursuant to words he heard from the new king’s own mouth ("Have I no friend who will rid me of this living fear?"), and the regicide king says,

They love not poison that do poison need,
Nor do I thee; though I did wish him dead,
I hate the murderer, love him murdered. V.vi.38-40.

So two weeping together make one woe. V.i.86.

I went out running at noon on the Mall on Good Friday with two work running buddies, H and M.  We wended our way through large throngs of tourists to the Washington Monument, enroute to the Lincoln Memorial, when I spotted a man carrying a large cross in a crowd of pilgrims and I stopped to snap a picture.

I lost my two running companions.  I have no idea where they went but after looking for them on the route ahead, and the place where I stopped, and the route back to work, I gave up and headed back towards the office, mad at myself for losing them because of my impulsive action. 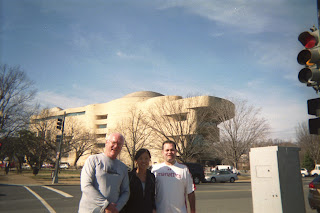 How can you stay mad while running?  As I approached the Capitol going back, I scrutinized the imposing prominence of Capitol Hill rising in the distance.  In the olden times I charged up that hill three times in the last mile of a fast 10K race, the venerable Capitol Hill Classic, back before I a chronic, nagging injury slowed me, back when I was younger and quicker.

Why not, I thought, do the last mile of that mile of that race right now and push it hard!  So I did, charging up the prominent third of a mile rise, acquiring the level street above and darting down the diagonal street to Stanton Square, finishing strong in front of the school there.

As I trotted back the further half mile to return to work, I was happy to partake, at least for about eight breathless minutes, in memories of times gone by but not entirely gone.  At work I encountered my two friends, who had looked for me everywhere out there (except in my past), relieved to see me returned to work in apparently fine fettle.
Posted by peter at 04:35 2 comments: