It's hard to believe it's been four years since President Obama's first inauguration.  What a new beginning that was, after the Worst Ever.

Four years later we have near-universal health care, a re-dedication to necessary regulation of the reckless risk takers that are Wall Street MBAers, a much better acceptance of out-of-the "norm" characteristics in persons, a dead mass-murderer of Americans, lots of dead terrorists without any DP or real oversight except for one man's, and more confidence in the future.  Second terms are historically tough, though.

Tomorrow is the public swearing in as well as the Martin Luther King holiday,  I'm staying away from the District, crowded as it will be with out-of-towners.  On Friday I ran to the King Memorial on the Tidal Basin and walked through it in commemoration of Dr. King.

Tomorrow on the MLK Day holiday I will be at the Stray Cat Cafe (just down from the Lost Dog Cafe) at noon for lunch.  Hope you'll join me, Jimmy Johnny and/or Danny, and we can start catching up on the last six years of silence.
Posted by peter at 14:13 3 comments:

When I was a boy growing up on Staten Island in the sixties, I voraciously read Ballantine War Books, pulp paperbacks with lurid covers detailing combat by World War II veterans, a conflict that wasn't all that far in the past then.  I recently re-read one of those paperbacks plucked off an adolescent boy's bookshelf from 45 years ago, its coarse pages yellowing and brittle but its slick cover just as vivid and vibrant as it was when I saw it on a book display case in a drug store and bought it for seventy-five cents.

Samurai! by Saburo Sakai (copyright 1957) is the memoir of Japan's leading surviving World War II ace, with 64 kills.  Mostly it is a paean to the superiority of the most outstanding fighter plane of the early Pacific War, the Mitsubishi Zero, a plane that easily outclassed all Allied fighter planes (except for perhaps the British Spitfire, but there weren't many of those in the theatre at the time) until the ominous arrival (for the Japanese) of the American Hellcat, a plane specifically designed to counter and better all of the Zero's superior traits.  Practically overnight the Japanese went from practically never losing an even dogfight to almost never winning any and they inexorably lost the war, so dependant was the Pacific conflict upon naval airpower.  The book details Sakai's many triumphant ariel battles early in the war, and his two love interests, and his later struggles in combat and grievous wounding when superior American fighter planes arrived.  Its cover, designed to attract the attention of a hero-worshipping boy, shows a painting of an American P-40 Warhawk (the famous "Flying Tiger" plane with the shark teeth painted on the cowling) engaging a Zero in combat.

Of my three sons, my middle child is (was?) most like me in that he loves (loved?) to read war books.  During the bitter divorce last decade, before his will was overborne and he stopped seeing me when he was 15, one of my proudest moments came when he called me to ask if he could come over to my house and take some war histories off my bookshelf to have and to read.  I dropped him off that night at his Mother's house with a large stack of World War II memoirs that he had picked out.

Those happy moments are but soft whispers way back in the furthest recesses of my mind now ten years later.  But today is his birthday and as is my custom on such days, I'm going to have lunch at noon at the Lost Dog Cafe in Westover in Arlington, Virginia, and maybe the birthday boy will show up.  In any case, I'm bringing his present along, a dog-eared paperback book entitled "Samurai!" by Saburo Sakai, bought by a 15-year old boy oh so long ago.

I got a Kindle for my 60th birthday last year, but it still sits in its box, unused.  I have a household full of unread books, bought for 25 cents at library sales, and the library is half a mile away.  What do I need another thing to put endless queues upon?

On the subway platform and train each workday, while half of my fellow humans there are totally isolated within their cocoon of selfhood, their earbuds sealing off their eardrums and their eyes riveted upon the device mere inches in their palm so they don't have to hazard a glance at a fellow human being, I have an open book in my hand and I can be engrossed in the biting winter at Valley Forge (I'm reading First Salute by Barabara Tuchman) but still be able to glance at my fellow travelers and imagine or engage in interactions, even if only for safety's sake.  Things can take shape on public transit that you might want to think about beforehand as they unfold.

I'm already swamped with books I haven't read that I'd love to get around to.  I have a bookshelf comprised of five twelve-foot long boards separated by cinder blocks in the basement that contains some of the books I have read.  Since age seventeen I have written down every book I have read, and a decade ago I digitalized the body of work by putting the list on a wordperfect document, by date and also by author, that I can search electronically or glance at the author lists.  All the unread books swim in the sea of clutter that is my house.

My friends who put their libraries on their Nooks and Kindles can't keep up with the additions to their endless queues they add to the back end of their device whenever they get bored and go off to Amazon for a few moments.  The unknown paramour is often more enticing than the steady tried and true immediately at hand.  So many books, so little time.
Posted by peter at 07:30 No comments:

Without a doubt the most stunning place I visted last year was Crater Lake in Oregon.  This magical place should be on everyone's Must-See list. 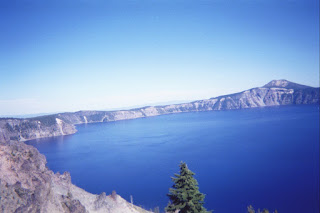 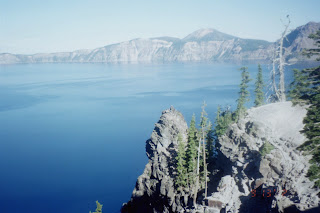 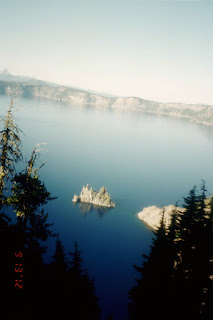 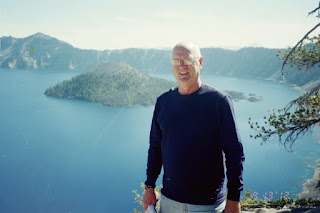